What to see at the WHVP. All tours and archive research start at the Rowe House.

FELTON FARMHOUSE - The Helen C. Brown Museum was originally a farmhouse, built around 1855 for Walter and Laurette Felton.  It stands on what was once part of an 80 acre farm, bordered by Marquette Road to the north, Cherry Hill Road to the south, Wayne Road to the east and Linville Street to the west. With funding from a state grant, Westland purchased the farmhouse in July 1979 and the house opened as the new permanent home of the Westland Historical Museum. In October 1988, it was re-dedicated to the memory of former Historic Commissioner, Helen C. Brown.  It is staged in an 1850-1899's farmhouse theme.  Just behind the house is our newly replanted herb garden.

CARRIAGE SHED - The Carriage Shed was permitted on September 22, 1980 and built on site by over 40 students of John Glenn High School’s Building Trade I class. It was completed June 1981. It houses a 1922 Ford Model TT Fire Engine (on loan from Wayne County). Future home of the Police and Fire Department collection. 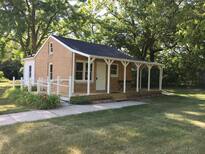 COLLINS HOUSE - The Richard D. Collins House was built on sight in 1940, with small additions added in 1945 and 1948. In addition to multiple special exhibit display cases,  The Collins House, was donated by the late Mr. Collins' widow, Ms. Marsha House and his sister, Ms. Velma Masten in 1988. It was dedicated in October of the same year.  In 1990, it was opened to the public. It houses the WHVP Gift Shop. Our military collection is housed in its own room also. The Nankin local schools display will be located here as well.

GUTHERIE OCTAGON HOUSE - The Gutherie Octagon House was built near Newburgh Road, north of Ford Road.  Originally owned by Walter Emmet Smith, the  two-story octagon was built in the 1850's as part of a brief octagon building phenomena in the second half of the 19th century. About a few hundred octagon houses are still standing in the U.S. today.  Two wings and sun porch were added in 1937 by the Gutherie Family when they made it their permanent home.  The unique shaped house is staged in a 1900-1950's upper class theme. Also, there is a room which houses our toy collection (1800-1990). Moved to WHVP in 2002, it is available for small, intimate weddings. 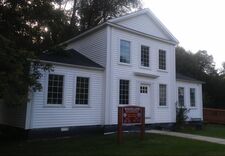 ELOISE HOSPITAL MUSEUM AT THE ROWE HOUSE - The Rowe House, a Greek Revival, was built in the 1830's on Ford Road in Canton, MI.  In 1978, it was moved to Marquette Road in Westland by the Westland Arts Council.  In 2005, it was moved to its current location. Opened in 2018, it now houses the official Eloise Hospital Museum collection. Records, timelines and artifacts representing life at Eloise for employees and residents are on display. "Eloise" was founded in Nankin as a Wayne County Poorhouse. It opened in 1839 with a handful of residents and the facilities expanded to house 10,000+ residents over 75 buildings at its peak in the 1930s.  Eloise officially closed its doors in 1986. A historic marker is located on Michigan Ave. at the hospital's location. The Museum's administrative office and the historical archives are kept here as well. Archives include historical books, newspaper clippings, and other records pertaining to Nankin Township, Westland and Eloise Hospital. (For more research tips, click here: archives) It houses The Rowe Family Gift Shop.

MCKEE BARN - The McKee Farm’s Barn was built in the 1930s on Cowan Road, east of Wayne Road in Nankin Mills and was donated by the family of Elmer McKee. It was moved to WHVP in June 2012. In addition to a horse-drawn winter sleigh, it will house the agricultural collection and various displays. 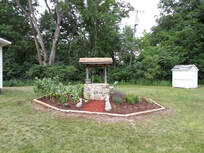 NORRIS WELL - John Norris and his wife, Azubah Phelps, settled in Nankin in 1826 on a farm they purchased in 1821. Their son, Philetus W. Norris grew up to be a politician, trapper, adventurer and the second superintendent of Yellowstone Park. Read more here. The well was built on their property some time after that. In early 1988, the well’s stone portion was brought intact to the WHVP. The upper wooden structure was built on sight and dedicated in October 1988. Repairs to the well and the replanting of the surrounding butterfly garden were completed on 16 June 2018. Local volunteer group, Friends of the Gardens maintains this picturesque addition to the Park. 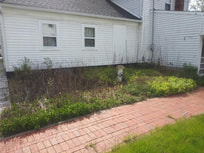 GARDENS IN THE PARK - In addition, to our beautiful Butterfly Garden around the Norris Well, we will have a few other gardens with a touch of history. Historic Commissioner, Cassie Smith brings a world of gardening expertise. In 2020, the plan is to re-establish a traditional herb garden behind the Felton Farmhouse, our anchor building. Stop by sometime this summer to visit and marvel at our progress! A special thanks to the generous support of the newly established Friends of the Gardens.

WNUK GARAGE - This building used to sit where the MJR Theatre (formerly Showcase Theatre), near the corner of Wayne Road and Hunter Road, now resides. The Westland Department of Public Service moved it to its current location in 1988. In 2021, electricity was restored to the garage and plans are to use it as a museum workshop.

Perrinsville Schoolhouse is offsite and can be viewed by appointment only.